The performance presents a process of continuous accumulation, never to be completed. The photo booth and phone booth represent contrasts between old and new forms of media, but also between the private and public spheres. Media channels and digital networks condition our communication and culture. Through free services for interaction and communication via digital networks, personal user data has become what makes up most of the content and capital in the internet, which is collected, hosted, and sold to the highest bidder. 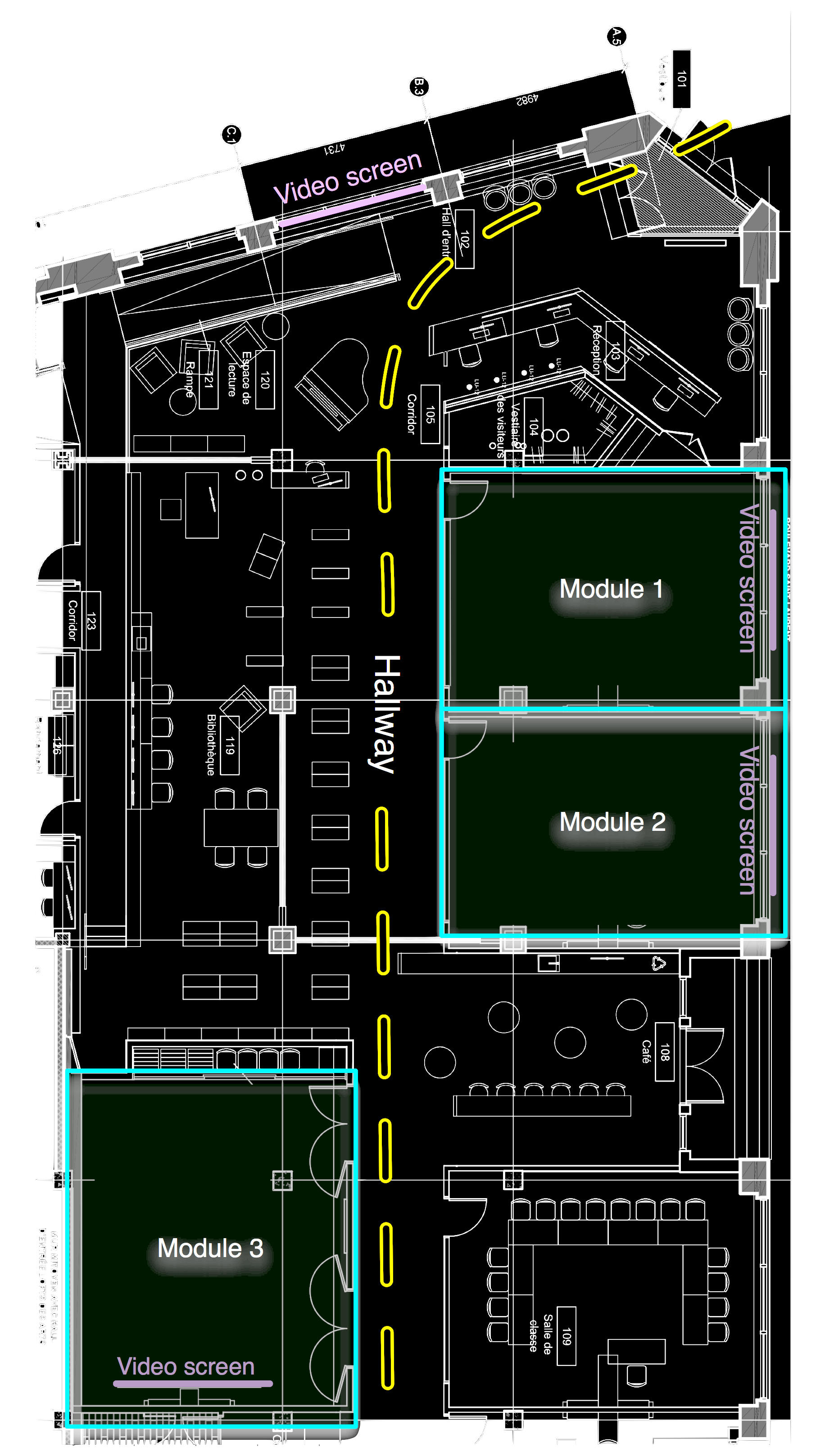 The first module of the installation presents a room with a photo booth in its middle (one of the earliest forms of automated self-staging),inviting the spectator to take a picture. This action, however, does not result in the expected printed photograph. Instead, a computer program begins to analyze the image and reconstruct the spectator’s portrait using portrait images of prior spectators. This recombination process is projected onto a semitransparent projection screen on a window which is visible both from in- and outside the installation. Technically speaking, this procedure is reminiscent of photo-mosaicing techniques, in which larger scale images are approximated via combination of smaller-scale images. Our combinatory algorithm works at multiple resolutions, considering image subsections, transitions, overlaps, etc. The database of images, which provides the source material for the image recomposition algorithm, is gathered during the performance, via images by other spectators. With every new image taken in the photo booth the database grows – and with it in a metaphorical sense the capability of reproducing certain aspectsof the spectator’s (visual) identity. This procedures illustrates the effectivity of meta data for reconstructing information. The database is indefinitely growing, the accuracy of reproduction ever-increasing. The idea of Big Data as an “open work”.

The second Module thematizes mediated communication in designated media channels. Here, a similar procedure as in the Visual module is applied: A telephone booth serves as input terminal and communication medium to the outside world. The telephone booth draws from a rich tradition of historic and cultural associations (literature, film, etc). It represents a personal space within a public space, a closed retreat for exchanging personal information. It can be seen a gate illustrating the polarity between “isolation” and “communication”. When picking up the phone handle, the spectator hears a voice prompting a conversation. This is not a human conversational partner, however, but a computer program, which has acquired its ’language’ by storing and classifying communications of prior spectators. It is in fact an illusion of information exchange, as the spectator communicates with reconstructions/recombinations of previously acquired contextual patterns. New forms of communication, such as the moderated forums, chat rooms, social networks etc. are an implementation of social conventions and rule systems which conditions not only how but also what we communicate. The spectator is confronted with this situation in her dialog with a chatbot (Artificial Conversational Entity, ACE), a digital deipnosophist that is de facto unable to ‘understand’. While conversing through the telephone, the voice of the spectator is being recorded into a database and virtually scattered over the space as material for audio synthesis.

Module 3 represents the virtual space of the data “cloud”. A video projection shows an empty virtual space in which the data gathered from the spectators manifests itself as visual objects (the reconstructed portrait images from Module 1) floating in different constellations and trajectories. This virtual space stands for the ceaselessly growing virtual data cloud; a form of digital “beyond”, time- and spaceless, in which data is gathered and hosted, retrievable at any time in the future. The audio fragments (spoken voice of spectators) gathered through Module 2 similarly populate a virtual space and are triggered by the positions and motions of spectators exploring this exhibition space. In other words, walking around in the physical exhibition space corresponds to a ‘browsing’ in virtual space. The more data is available, the ‘richer’ and ‘noisier’ the auditory soundscape becomes. This third module sheds a new light on the installation – digital interaction as ‘data gathering machine’.